An Article by Steve Rowe (Grading)

An Article by Steve Rowe (Grading) Let’s look at some examples: “We started at the same time, why did they grade and not me?” Because the other person turned up for lessons and seminars, paid attention, took notes, trained at home and progressed. “I can’t attend the seminar because……” The reason doesn’t matter, you won’t be there to learn, take notes and incorporate that knowledge into your training. So the outcome will be nil. What’s taught in a seminar is rarely ever taught or presented in that way again so the opportunity is gone forever. “I’m increasing my fitness and CV levels at the gym each day.” Fine if you’re in recovery from injury and unable to do your Martial Arts training but if the balance of what you’re doing is in favour of the gym, you will probably become more stiff, awkward and fitness oriented as opposed to developing Martial Arts skill. CV and Fitness can also be trained Martial Arts style as well increasing your skill levels at the same time. “I’m really trying…..” Yes you are – and won’t progress until you start doing, a significant difference. “There’s so much to remember” No there’s not, Martial Arts is one thing, not many. It must always be practiced with an inner smile with ideas for improvement ‘lightly suspended’ in the mind and they will become reality as they gradually soak in of their own accord and in their own time. “I’d love to train with you but…..” Stop right there. You’re not going to train with me so why make excuses, I don’t need them. “It’s getting boring repeating the same thing……” Well, when you stop being crap at it maybe we can move on. “I’m so busy I don’t get the time to train and attend lessons as much as I want to…” As long as your expectations match your effort – no problem. “You have to dedicate your life to it…” Wrong way round. It’s the key to improving the rest of your life with all the health, confidence and other benefits it brings. “I’m doing it in my own way…” Better award yourself your own Black Belt then. (And many do.) “I’m due my grade…” The most commonly used term by the ‘Suburban Samurai’ who trained for 3 years to 1st Dan and have done no real developmental work since, they could have trained for thirty years repeating that same first three years ten times. They have bought or bargained for every grade since, maybe switching Associations when they didn’t get it when they were ‘due’ they are now a high Dan grade but really still an old, tired repetitive 1st Dan standard. “Although he’s not worth the grade he’s been the Club Secretary for 20 years.” The problem with ‘honorary’ grades is that they make the wearer look stupid. It’s better to give the person a ‘certificate of service’ or something rather than embarrass them in that way. This is only a few samples of common statements made to give you the idea, but writing in failure is a deadly trap and we need to listen to the voice of experience and consider the consequences. It’s your choice whether to follow the advice or not. A good Coach will tell you straight. Whether you agree with them or not is your choice but it’s the Coaches job to be honest. Most people nod their head or get upset because it’s not what they wanted to hear but in the long run the Coach knows how it will pan out from experience. There are many Coaches and clubs out there that will pander to those weaknesses and take your money and grade you anyway, but you have to live with yourself afterwards." From an Article By Steve Rowe (Shi Kon Martial Arts)
Posted by GOS at 15:55 No comments:

The government have decided that, from the 6th October,

all counties will be at Level 3, for a period of 3 weeks,

at which point the situation will be reviewed (by the government).

Please take care and aim to over-achieve regarding public health advice.
We hope to be back as soon as possible .
Posted by GOS at 12:51 No comments:

We are going to reopen the Dojo with care and attention and faith in the co-operation of all our members.

Everyone's health and well-being is our number 1 priority.

If you have any questions please email us at ; falcarraghkarate@gmail.com

Here are some bullet points about reopening.

·         All classes will have a 15 minute tidy up,  at the end in order to clean the dojo, for members to self sanitise. We kindly ask, that everyone arrives on time and leaves as directly as is possible after class, to help facilitate good hygiene practice.

as numbers will be limited to maximum of six, due to the social distancing measures required - just now.

These important guideline points will be in place for the first month when we will review and update it.

Again thank you so much for keeping the Kissaki Kai spirit alive in a very difficult time for everyone.

I hope to see you all soon. 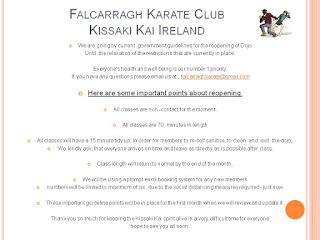 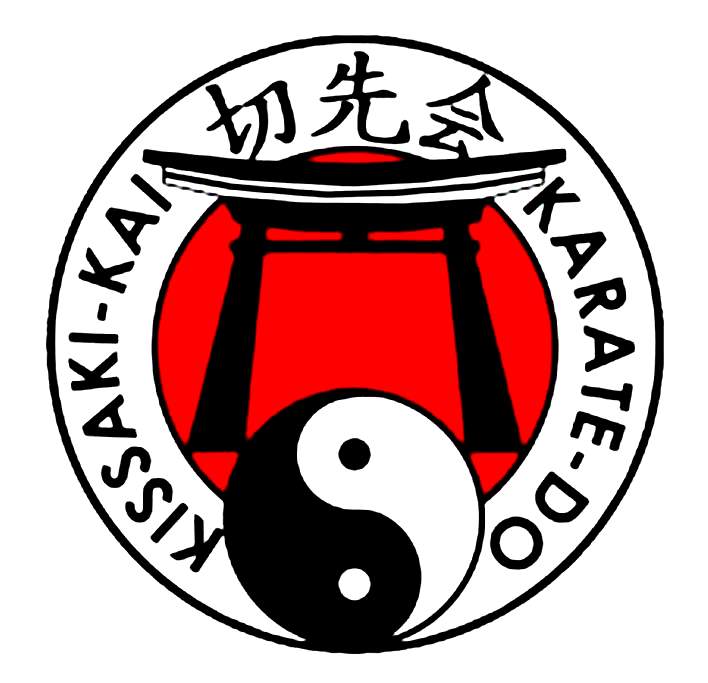